Dessie Farrell is quiet when he comes in. It’s over. Seven years since Dublin last lost a championship game and here they are. Defeated. That it is Mayo who finally found the hole in the Death Star is apt. No team tried for longer to do it. That they managed it after being blown off the pitch in the first half of normal time just makes it all the more Mayo.

“They did it in the Connacht final as well,” Farrell points out. “We knew they were going to bring a lot. We struggled to get out past their high press. We made a couple of mistakes, a couple of bad decisions. I thought at one stage if we could get a score or two it might start to ease the pressure and we could ride out the storm.

“But we never got that extra score ahead and you could see it building then and it was very hard to disrupt the momentum they generated. They got back into it and got the draw and won it in extra-time.

“We had played so badly in that 70 minutes that you felt we were going to try and make amends and redress that situation. The black card [for Colm Basquel] was a killer then. At that stage, when bodies are tired and you have to go chasing, a black card is a killer. It was very difficult to get the ball back. A black card at any stage is problematic, the way teams are capable of keeping possession. But particularly in extra-time when there are tired bodies and tired limbs, it was exceptionally difficult. That probably spelt the death knell at that stage.”

All the talk all year has been of Dublin coming back to the pack. Did he buy into any of it?

“Not particularly. Obviously we would have liked to have been coming into this stage of the competition with a little more momentum. You would have liked your collective team form to be a little better than it was. We showed glimpses of it here and there in patches, in some really good patches.

“The first half was really good at times but the second half was the direct opposite of that. It’s hard to diagnose but it revolves around the lack of consistency across the quarters that was hurting us through the championship and it manifested itself again today.” 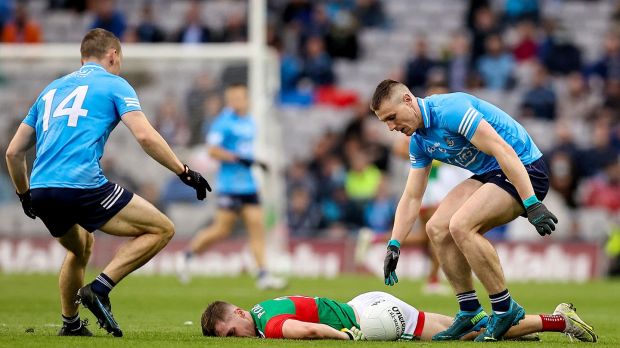 When James Horan comes in, the drama of a night like this is the only place to start. How’s the heart, James?

“Okay now. Okay. It wasn’t great for periods but we’re obviously delighted at that. We were probably tentative in the first 15 to 20 minutes. Whether we should push forward or maybe hold a little bit – we got a bit caught in that maybe.

“But even with that we had three or four very bad wides and we had a free that we missed. It could have been something like 0-10 to 0-7 even though we played very poorly. Our energy wasn’t what it usually is. We managed to lift our energy and it took off from there.”

Horan was visibly incensed during the game when Eoin McLaughlin was blindsided by a John Small shoulder and referee Conor Lane didn’t stop the game.

“I know he’s in a lot of discomfort. The medical team are with him and he’s gone to hospital so we’ll have to see how that is. I just thought that one in particular was very dangerous. The way Eoin fell, you know when a guy falls like that they’re in bother but the play went on. So I annoyed about that. “