If you’ve been wondering what Denver’s business leaders think about work, jobs and unemployment, a pretty large source of influence had already taken a stand.

“An economy that doesn’t work for all Coloradans doesn’t work for us,” Prosper CO says on its website. The organization was started as a committee two years ago by the Denver Metro Chamber of Commerce and its affiliates as local employers struggled to fill jobs. Prosper took shape last during the pandemic and the Black Lives Matter movement.

This shows that the question of whether the huge number of unfilled jobs that remain in Colorado is an issue of too few workers or poor pay is something that business leaders in Colorado’s largest city have been grappling with since before the pandemic.

And in the eyes of the group, it seems like the answer is that it is both.

The organization took a look at the demographic data to figure out who the economy wasn’t quite working for. Some observations: 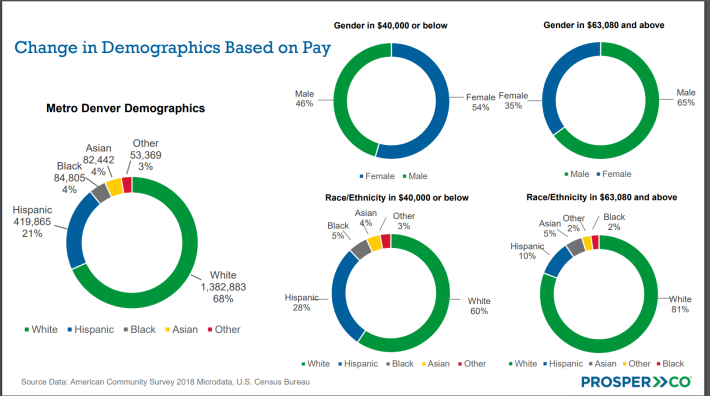 They picked the $63,080 wage because in 2018, that was Denver’s annual average wage, according to the U.S. Bureau of Labor Statistics. That number rose to $68,357 a year later so Prosper also raised what it believes is the bare minimum of self-sufficiency to $45,000.

“We think at about $45,000 you can scrape by,” said Lorena Zimmer, who oversees Prosper CO for the Chamber. “You might have to have a roommate, depending on where you live, and things like that. It’s not a perfect number but that’s where we started.” 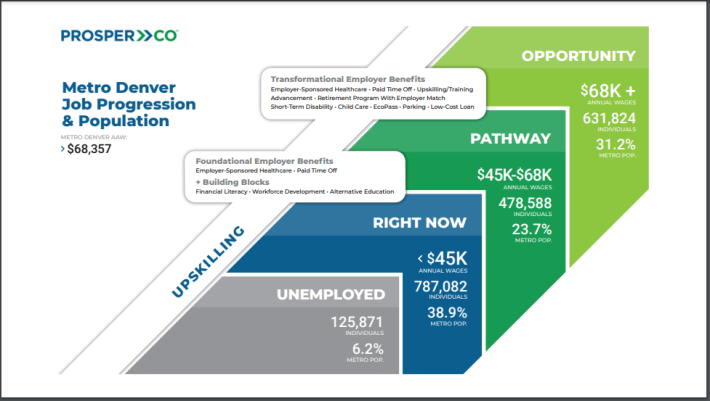 The goal of Prosper is to get most of the population at or over the $45,000 wage. And because of the demographics of workers below that income level, the program hopes to naturally help more women and people of color.

“It was the pandemic and the BLM (Black Lives Matter) movement that really made us say, ‘Look, we need to move faster,” Zimmer said. “When you look at the people that lost their jobs, they’re primarily in those low wage categories. We have an overrepresentation of women and people of color in the under $45,000 a year jobs. So, that’s why we said, ‘All right, we need to double down. Let’s get started right away.’”

They came up with 10 priorities for companies:

As members stepped up to participate, Prosper asked them to join its leadership council, composed of companies that have vowed to improve the working environment for lesser skilled and lower-wage employees.

“Our superstar leadership council (are) the ones who have raised their hand first,” Zimmer said, pointing to examples including HealthOne, which offers tuition reimbursement and a shadow program for anyone on staff to see what another job is like.

Prosper CO is part of the Denver Metro Chamber of Commerce. (Screengrab)

There are, so far, 43 companies on the council and include Anthem, BBVA, Comcast, Xcel, Kaiser and VF Corp.

So, if you work for any of those companies and make less than $45,000, speak up! Prosper is working with HealthOne to design a career path for existing workers to move from entry-level jobs to higher-paid ones in health care.

The organization is also working with HR departments at various companies to write better job descriptions so employees learn what skills are needed and how to get them. There’s also a job-mapping effort in development for employers to see how their workforce compares with others in the region and to show what benefits can be used to move workers from one income level to the next — suggestions include tuition reimbursement that is paid upfront, flexible schedules and childcare benefits.

In company movement news, Michigan-based Service Express is opening a new office in the Denver Tech Center near where Interstate 25 meets Interstate 225. It plans to hire 100 more people in the next two years, adding to its existing 17 employees.

The company is part of the data center industry. But it doesn’t run data centers, it services the equipment.

“Companies who purchase hardware for their data center often refresh their equipment every few years, but the useful life of the equipment can be seven to 10 years. We help to extend the life of their equipment,” said Joshua Leatherman, its chief marketing officer. 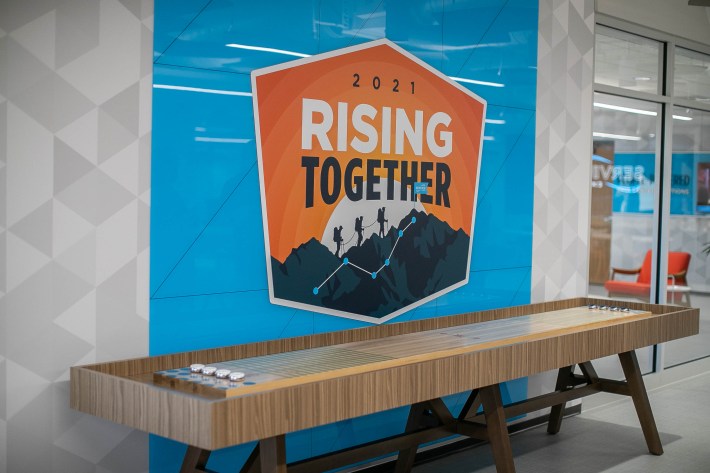 Service Express, which helps companies maintain their data center computer equipment, is moving to a new office in the Denver Tech Center in June 2021. The Michigan company plans to hire 100 workers in the next two years. (Provided by Service Express)

What caught my eye about this company, which sent me a pitch about its expansion, is that it says it’s “revered among its employees as not just a job – but a career.” Indeed, the company’s employee reviews on Glassdoor show 93% would recommend it to a friend and 99% approve of its CEO.

Leatherman said the sales development rep jobs have an average annual salary range of $45,000-55,000, plus commission and include health care on day one, a paid day off on your birthday and other benefits. >> JOBS

That’s a big ask for restaurants, retailers and other employers in service industries. It’s also not going to happen for workers in an entry-level job, where employers can pay the state’s minimum $12.32 an hour ($14.77 in Denver).

Zimmer, from Prosper CO, said that the Denver Chamber doesn’t have a lot of restaurants as members. She acknowledged it’s tough to raise wages in low-margin industries. In fact, employers from other industries are looking at those service workers to fill their own company needs.

“We’ve had an IT member say, ‘What we need to do is start stealing from retail,’” she said.

She said such employers need to consider what’s next for their staff. Vail Resorts, for example, increased its minimum wage this week to $15, from $12.50, an hour and added sick leave for all full-time and seasonal workers, reported Vail Daily. Full-time at $15 an hour is $31,200 a year.

“As employers, that’s the jobs that they have, we have to acknowledge that,” she said. “But, I think everybody should have a responsibility of thinking about what’s next for their employees.”

The Colorado Restaurant Association says restaurants are raising wages. A recent survey of its members found that 95% have done so, while 21% expanded benefits.

A quick look at the CRA’s job board shows many gigs above minimum wage, including some rising above the $45,000 mark. A few selections:

June 12 is the last day unemployed workers in Alaska, Iowa, Mississippi and Missouri are eligible for $300 weekly bonus pay provided by federal relief plans. Next week, another half dozen will join them. To date, 25 states — all with Republican governors — have decided to end federal aid to unemployed workers early because of the difficulty employers are having filling jobs, reports tech-news site CNET.

That’s not happening here. Colorado Department of Labor and Employment officials said in May that they are committed to paying the federal aid until the program ends on Sept. 6 — and a spokesperson from the Governor’s office concurred. 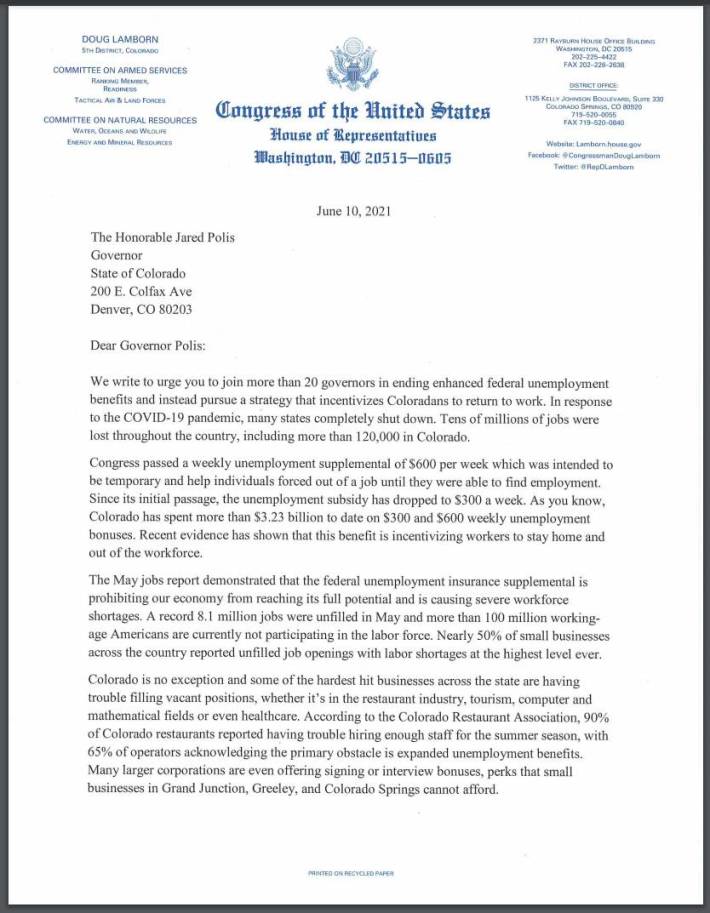 This week, three Colorado Republicans in Congress sent a letter to Gov. Jared Polis asking him to end the benefits early. Reps. Doug Lamborn, Ken Buck and Lauren Boebert pointed to federal statistics that 8.1 million jobs remained unfilled in May and more than 100 million working-age Americans were not participating in the labor force. COVID-19 cases are down, mask mandates have been removed and vaccines are available.

“This benefit was meant to provide temporary relief, not be a permanent addition to unemployment benefits,” reads the letter.

In response, Gov. Polis sent the three lawmakers his own letter. 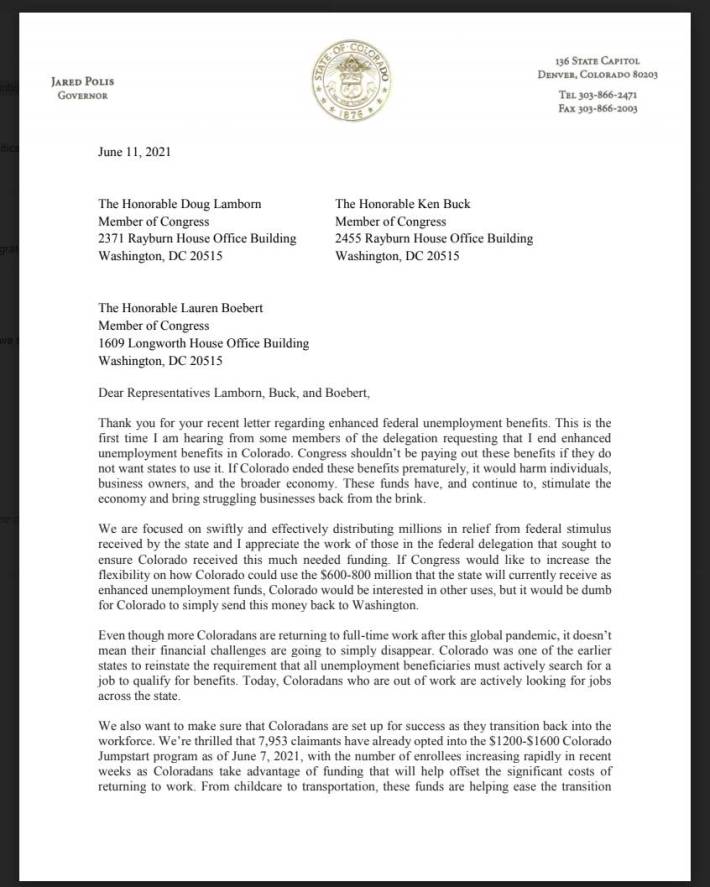 “This is the first time I am hearing from some members of the delegation requesting that I end enhanced unemployment benefits in Colorado,” Polis wrote. “Congress shouldn’t be paying out these benefits if they do not want states to use it. If Colorado ended these benefits prematurely, it would harm individuals, business owners, and the broader economy.”

If Congress gave the state more flexibility in how the estimated $600 to $800 million can be spent, Polis is interested, because otherwise, “it would be dumb for Colorado to simply send this money back to Washington.”

Just after committing to federal benefits till the program’s end, Polis’ office created the Colorado Jumpstart program to incentivize unemployed workers to find a full-time job right now. Current incentives offer $1,200 for those who find a job by June 26 and work at least four weeks. As of June 7, 7,953 Coloradans have opted in.

“Colorado was in a skilled worker shortage in many industries with unemployment below 3% prior to the pandemic,” Polis continued. “It is unrealistic to expect that following a global pandemic and challenging economic environment that it would be like flipping a light switch, but we know the $1,200 – $1,600 incentive provided through the Jumpstart program is helping make sure that work is rewarded.”

25% — Increase in first time filings for federal Pandemic Unemployment Assistance for gig workers in the week ending June 5, when 1,098 claims were made.

2.26% — Decrease in the number of Coloradans on unemployment for the week, ending May 29. Approximately, 141,168 people remain unemployed.

? — How long people are still waiting if something is wrong with their account. One unemployed man shared that he was told “four to six months” for an investigator to review his case.

It’s difficult to say how long the wait is, said Jessica Hudgins Smith, press secretary for the Division of Unemployment Insurance.

“As we’ve mentioned in the past, investigation timelines really depend on the complexity of the claim, and we cannot share details about claims under investigation,” Smith said in an email. “We’ve also been able to use our fraud analytics to clear some egregious holds en masse. Our staff is working hard to clear legitimate claims as fast as they can while also upholding the Department’s responsibility to protect Colorado’s Unemployment Insurance program.”

→ If you spent weeks and months waiting for rental housing assistance, read all about the holdup and why it took the state’s Division of Housing $6.5 million to clear it up — even if it meant paying customer service contractors $65 an hour. >> READ

→ Unemployed homeowners were cut out of the December federal relief package. But the March one is helping Colorado set up the Homeownership Assistance Fund. The Department of Local Affairs is asking for bids on the project so expect a new program this summer.

→ Paycheck Protection loans may be over but the SBA is promoting Colorado’s CLIMBER Loan Fund to provide loans to small businesses that were doing just fine before the pandemic but not so much anymore. There’s $250 million available to businesses with 5 to 99 employees. >> DETAILS

This column continues to be a work in progress as we move into pandemic recovery. Reach out to tamara@coloradosun.com if you have a plethora of jobs to fill, a frustrating experience with unemployment (or good one!) or have opportunities that are changing the economy that we live in. Until next week! ~ tamara

The Colorado Sun has no paywall, meaning readers do not have to pay to access stories. We believe vital information needs to be seen by the people impacted, whether it’s a public health crisis, investigative reporting or keeping lawmakers accountable.

This reporting depends on support from readers like you. For just $5/month, you can invest in an informed community.

A Comparison of 2 Data Frameworks